My computer geek blog is at www.bluecog.com

Some of my pictures can be seen on Picasa

If you want to buy something for me here's my Wish List.

Music by the Shack Monks.

Software I use often

Mozilla Firefox is presently my web browser of choice, though I still use IE for a few Microsofty sites.

There are many add-ons for Firefox. I use Xmarks (was Foxmarks) and the Web Developer extension by Chris Pederick. Also added Firebug to the kit.

Google Chrome works well for most sites and it's fast. In my case Chrome may be faster than Firefox partly because Firefox is my beast of burden browser loaded down with extensions, RSS feeds, and a ton of bookmarks.

I use Mozilla Thunderbird for email at home.

I use Microsoft Outlook for business email and scheduling. Despite the fact that there are a lot of links to free and open source software here, I'm not a Microsoft-hater. I do like some of their products and development tools. Most of the development work I have done has been on Microsoft operating systems, from MS-DOS to Windows 7. I am running Windows 10 on a PC at home, but not doing any development work on that one yet. Nonetheless, I am glad there are alternatives for situations where the Microsoft solution is too expensive or just plain overkill for the task. I do prefer simple and effective solutions regardless of the tools used.

SlickRun is a program launcher that I have been using to navigate faster in Windows. It helps you spend less time reaching for the rodent. Keyboard commands, once you memorize them, are almost always faster than using the mouse. I also tried Launchy but preferred SlickRun.

Notepad++ is a freeware text editor that I use when I'm not working in an IDE but Windows Notepad just won't do (like when I want to select columns of text to copy and paste). It is good for editing source code and XML, and it has a lot of plug-ins available to extend its capabilities. I still use Crimson Editor occasionally. Selecting columns of text seems to work better in Crimson than in Notepad++.

When I'm doing the occasional bit of web development on Linux I use Geany, gedit, or Vim for editing source code (depending on the project, day of the week, phase of the moon, etc.).

Audacity is an excellent (and free) audio recording and editing program.

Also related to audio files, Mp3tag by Florian Heidenreich is a very nice tool for editing the ID3 tags in MP3 files. It can also edit metadata for a number of other audio file formats. If you want to split large MP3 files into smaller ones Mp3Splt will do the trick.

In addition to the GIMP, and an old version of Paint Shop Pro, I have been using Paint.NET for photo and image editing.

WhereIsIt is a program for cataloging media such as CDs, DVDs, or diskettes. I use it to catalog the many data backups and archives I have on CDs. It could take hours of searching through those CDs to find what I am looking for without this program (all the while mumbling "Where is it? Where is it? Where the #@$& is it?").

For FTP file transfers I use the open source FileZilla when I want a GUI for poking around on a FTP site.

My favorite file comparison utility is Beyond Compare 3 by Scooter Software. They have a fully-enabled trial version you can use for 30 days (I like that it counts only the days you actually run the program, not calendar days, when counting down the trial period). For me it was well worth the cost to register it for my main development PC since I often need to compare files and this program does a slick job of it. I have also used WinMerge in the past. It's free and works well. Both of these programs integrate with Windows Explorer and allow you to select files for comparison from the right-click context menu (in WinMerge, I prefer to select Enable advanced menu in Options⇒System⇒Integration).

I have started using Git for version control on recent projects. For projects where I'm using Git on Windows, I use msysgit to provide a Git BASH prompt.

For older projects I continue to use Subversion and Trac, running on a Ubuntu server, for version control and issue tracking respectively. On Windows PCs used for development I run TortoiseSVN, a Subversion client that integrates with Windows Explorer as a shell extension.

Since digging into C# and the .NET framework, I mostly use Microsoft Visual Studio 2008 for developing software these days.

I still think Delphi rocks (and paved the way to where Visual Studio is today) and use it for the occasional Win32 app.

AutoIt is a very nice scripting tool for automating Windows. I discovered AutoIt when I was searching for an alternative to VBScript (and Windows Scripting Host) which was just not working well for a specific automation task. Glad I found it. 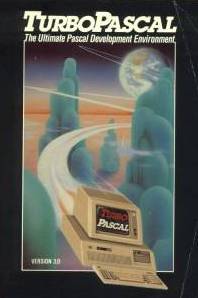 This is where it all began - my being a programmer, that is. Well actually it was BASIC on the VIC 20 and then the TRS-80 where it began, but Turbo Pascal is where it kicked in. Turbo Pascal became Borland Pascal which eventually became Object Pascal, the language behind Borland Delphi which is now Embarcadero Delphi.

Paradox: For years the DOS version of Paradox was my "Swiss Army Knife" for quick data manipulation. Paradox was easy to program using the Paradox Application Language (PAL). I built a number of applications using it, some of which remain in use as of 2007. As of 2008 I am moving Paradox to the nostalgia section though I'd bet some of those apps are still running.